When the doctor tells you that life is about to end, it certainly ruins a good day.

It was June 2011 and the corridor in the hospital was full of people about to be told how long they had left on this spinning rock before ‘their cancer’ took them. I imagine most of them are now long gone with nothing now left of them but the memories. I assure you that corridor is as full today as it was then!

OK, now imagine this: it is February 2012, it’s cold, wet and miserable. You are sitting in your oncologist’s office, same smell and noises as before. In the same chair (now white instead of black) you sat in eight months ago when you were told, for the first time, that you have cancer and your heart had stopped beating for what felt like hours.

You have endured ‘all’ that radiotherapy has to offer and then been told that you are cancer-free, and what a feeling that was!

Now, as everything turns surreal, above the muffled distant hospital sounds coming in from the corridor and the sound of the new leather chair you are sitting on, you hear “… Your cancer has returned…spread …you have an estimated life expectancy at maximum of 12 months. I am so sorry…”

But this time I had no heart stopping for hours, just a voice inside my head, shouting:

“I am not going to die! And why the hell do they always say “your cancer”? I do not own it, I don’t want it. The first option you were given did not work, so what now? Go and find another and another… until it does work?”

Without knowing it, there and then, I had become part of the process of living.

It is now seven months later and it has just taken me 20 minutes to walk up two flights of stairs. I turned around and sat down on the top step, totally exhausted, nauseous – almost gagging and covered in cold sweat. The cancer is taking its toll, I thought, but nothing is going to dampen my spirits.

Just before 2am this morning, I woke Raphaela (my wife) by saying: I know how to kill this cancer!

Many, many days and nights had passed and today was no different from the rest. Again, I could not sleep and again I scavenged the internet for information. And there, waiting patiently to be read…

…the words: “Cancer can not survive in an oxygenated, alkaline cellular environment.”

Ten words that took my breath away – I literally felt the impact of these words in my chest. Similar to what I had felt when seeing my sons born.

There and then, I knew I had found a way not to die!

It was something that I had never heard of before. Something that a German biochemist by the name of Dr. Warburg had won a Nobel Prize in Medicine for, in 1931! By alkalising your body’s ph levels, THROUGH WHAT YOU EAT, you reduce glucose production within cells and that in turn reduces acid production that cancer cells feed on. Ultimately, you starve the cancer from within.

“If you change the way you look at things, the things you look at change!” So said Dr. Wayne Dyer.

You are on your way home in winter, you are frozen to the core, hungry, miserable and exhausted and you cannot wait to get home. Finally you are there, you turn the key and the warmth from within engulfs you. You hear the kids playing, the telly blaring, friendly faces rushing towards you to greet you, you smell the food being prepared and you cannot wait to take the load off your feet.

OK, I know what you are thinking! This is all very Hollywood and totally exaggerated and you are possibly correct. But it is exactly that overwhelming feeling of ‘everything is going to be OK’ that I experienced about 4 weeks after sitting on the top of those two flights of stairs, riddled with cancer.

Four weeks after changing to an alkaline diet, I felt a sensation within me. It was nothing new but one I had not experienced since before being diagnosed with cancer. It was a feeling of NOT DECAYING, for want of a better word.

I felt a sudden but lingering burst of sweet, sweet energy that probably was not more than a two foot swell for most people but for me, it felt as if I was surfing a tsunami.

The room in which we had always spent as little time as possible, had become the centre of my/our world. It had become my treatment room. Once quite a sterile-looking environment, the kitchen had turned into a hive of activity, filled with colours, smells, textures, fragrances, herbs in bottles and more herbs growing in pots on the windowsill. The space, once occupied by the microwave, was now filled with mostly plant-based recipe books, cuttings from magazines and printouts from the internet. Everything we learnt from our daily research into the world of nutrition, we implemented here and as we learnt and grew, so I could feel life growing back within me.

But there was something else growing inside me!

It is said that nothing in the universe stands still and that everything is in constant motion. That everything is either moving forward or going backwards. I guess you could also say growing or dying. This is the perfect description of what was happening to me! The cancer was slowly dying… yes, I could feel it happening! Simultaneously something else was growing: a deep-seated urge to help prevent the entire world from going through the hell that I had been through, that I was still going through and the unknown that still lay ahead.

“It took my Daddy two and a half years to kill the cancer dead” as my youngest used to say. So, no – no quick fix.

Now, I know that you are going to think, ‘This man is impossible!’ when you read the following, but in my defence, it was really important.

It just so happened that again, it was 2am in the morning, when I woke Raphaela, to tell her that I was “going to start a radio station, a health radio station”! And no, her reaction was not, ‘are you crazy, it is @#$%!*f! two in the morning and you are going to do what?!’

All she said was and I quote: “I am sure you will!”

Six weeks later we launched UK Health Radio – “real feel good radio”. The first ever radio station in the world dedicated only to health and wellness.

I wanted to – and now more than ever before – make quality and true health information accessible to everyone in one central space. But not only one sided information but as many treatment options for each health condition as possible. UK Health Radio, purposefully does not favour either alternative healthcare, or traditional healthcare, but features both, side by side, with the intention always to inform, never to provoke.

Today, seven years later, we have 28 presenters with 1.2M+ dedicated listeners in 54 countries around the world. We can honestly say that we believe we have the most up-to-date information on the widest range of health topics available.

Another very important life-lesson learnt on this journey, is that not every option works the same for every person. “Different strokes for different folks” as the saying goes. I realised that this applies, not only to treatment options but to the way we were delivering the information. Some people like to listen, some might prefer to read or perhaps a combination of both.

It was a crisp but clear Sunday morning in February 2013 and Raphaela and I were on our weekly twosome walk, or as we call it, our ‘imagineering’ time. (Thank you, Walt Disney, for that amazingly descriptive word!) As my recovery progressed, we had again started making plans and spoke of the future in the same way we had 26 years before, sitting in the warm sunlight that was streaming through the window of the Art School’s cafeteria, where we had met, with Raphaela studying design and me obsessed with photography!

Sorry I digress; so back to our walk. We had just navigated the first corner after leaving home when Raphaela stopped, turned to me and said: “Yes, let’s do it!” No, it is not what you are thinking and no, I had already asked her to marry me 21 years before. On our walk the previous week, I had spoken with Raphaela about her designing a magazine for UK Health Radio.

I had become quite obsessed with creating a second medium to channel health information through, informing and showcasing all options of treatments. But just as important, or perhaps even more importantly – showcasing all options of prevention through lifestyle changes such as nutrition, reducing stress, sleep, breathing correctly, spending time in nature, meditation, fasting, cultivating an attitude of gratitude and mindfulness.

24/7 365 we deliver reliable health information so that YOU, our listeners and readers, are able to make better quality decisions when it comes to your health and that of your family.

UK Health Radio (www.ukhealthradio.com) has a very clear purpose and this is to inform and animate YOU, in a positive way, to take responsibility for our own health and this does not mean taking your health into your own hands, but to be an active part of the process of attaining and/or keeping your health freedom.

UK Health Radio simply aims to be the world’s leading health conversation station. And our stated mission is to Change the world one show at a time! 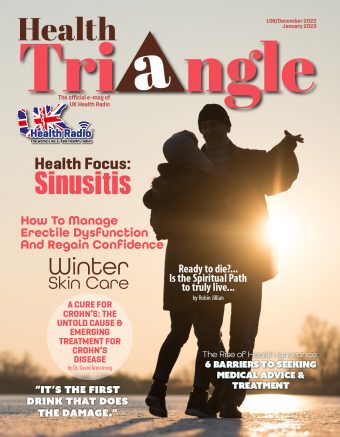 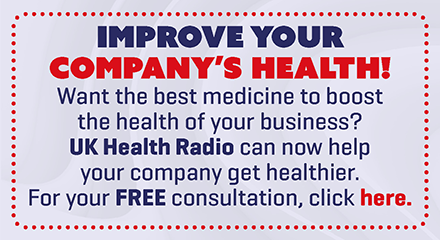